Do You Know the 20 Lists You Should Be Keeping?

Entrepreneur recently posted an article about the to-do lists and people lists that business owners should keep. These are mainly lists of resources and projects that could mean the difference between success and failure.

What’s your Marketing Plan for Q4? 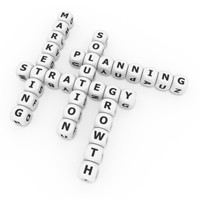 It's been three years since this article “5 Things to Know Before You Start a Marketing Plan” was published. Content marketing is still such a new creature to most of us that it might be a good idea to expand on some of that information, and look at how you can use it to finish out the calendar year on a roll.

What's in it for your customers? The main benefits for most customers are time and money—are you addressing both of these? Customers appreciate being informed of sales and other specials, but it's just as important to be considerate of their time. Are you delivering your messages in a timely fashion? Are you consistently reminding clients of appointments? Do you have a system in place to let them know their purchase is ready to be picked up? Are your customers able to access your content quickly? Marketing often involves tying up these loose ends.

If not, you'd better get one! Do you have a Sales & Marketing Strategy?

Jordan Hatch, my long time friend at Infusionsoft wrote a great blog post a couple of weeks ago on "How To Create A Sales and Marketing Strategy" that I want to share with you.

There probably isn't a week that goes by when you don't notice an ad on a website or in your email talking about “creating killer content”. So what does it really mean, and why do you need to do it?

Content marketing is often sought out by customers. It offers them the information they’re looking for when they need it the most.

Here's how to make it work for you:

Why? Everyone Needs a Membership Site.

In a recent blog post here, we talked about "Building A Fence Around Your Herd." One of the strategies there was having a membership site. I recently wrote an article published in the July 2015 issue of the Joomla Community Magazine, that offers 10 reasons why you NEED a membership component to your website. Check it out by clicking here to go to the article.

Put a Fence around your Herd

Herding cats is hard work. Just ask any of the ranch hands in the award-winning EDS ad made back in 2001. The slippery felines gave them all they could handle and more. Proud, independent and stubborn, every cat wanted to make its own way whether the ranch hands wanted it to or not. Does it sometimes feel like keeping your customers happy is a lot like cat herding?

A key recommendation by Dan S. Kennedy, the marketing expert, is to build a fence around your cats (customers) to keep out poachers and to prevent them from going off on their own. Just because your customer has made a purchase from you in the past doesn't mean he or she is your customer forever. It's important to try to offer your clients extra products and services -- extra value -- that will keep them coming back to you.

This originally came to me from a friend and fellow ICP, Wes Schaeffer - The Sales Whisperer. Used with permission. 3,059 Days For Freedom

War is an ugly thing, but not the ugliest of things.
The decayed and degraded state of moral and patriotic feeling
which thinks that nothing is worth war is much worse.
The person who has nothing for which he is willing to fight,
nothing which is more important than his own personal safety,
is a miserable creature
and has no chance of being free
unless made and kept so
by the exertions
of better men than himself.
~John Stuart Mill

July 4th around the Country

July 4th, 1776. The Declaration of Independence, a document announcing our independence from England had just been signed by 56 courageous men. Afterwards, they all headed over to Thomas Jefferson's for a big party. They patted each other on the back around the grill, tossed back a couple of cold ales and threw the old football around. Meanwhile that crazy nut John Hancock nearly burned his wig off lighting firecrackers.

Even though the Declaration had been signed, things were far from settled. The Revolutionary War was still going on, and wouldn’t end for another seven years. Fourth of July celebrations didn't become a “thing” until after the War of 1812, and ever since it's been the United States' favorite summer party.